History of the Easter Bunny or Easter Rabbit!

History of the Easter Bunny 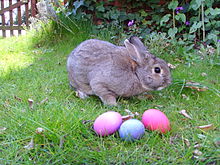 How did we come to associate an egg-laying rabbit with a religious holiday? The Easter Bunny or Easter Rabbit is usually shown as a rabbit that brings  Easter eggs in a basket to children. Read on for a concise explanation of the history of the Easter Bunny!

The Teutonic (German) and Saxon deity Eostra was the goddess of spring and fertility, and feasts were held in her honor on the Vernal Equinox (the first day of Spring). Eostra'ssymbol was the rabbit because of the rabbit’s high reproduction rate.

An Anglo-Saxon legend tells how the goddess Eostre (the root of our word Easter) found a wounded bird and changed in into a rabbit (or hare), so that it could survive the Winter. The rabbit/former bird found (undoubtedly to its surprise) that it could still lay eggs, so rabbit decorated these eggs each Spring and left them as an offering to the goddess who had saved it.

The Easter bunny is thought to have first been mentioned in print in Georg Franck von Frankenau's De ovis paschalibus (About Easter Eggs, "Weiser Antiquarian Books - Catalog") in 1682 referring to an Alsace (formerly in Germany, now in France) tradition of an Easter Hare bringing Easter Eggs.

The idea of an egg-laying bunny probably came to the U.S. in the 18th century. German immigrants in the Pennsylvania

Dutch area told their children about the "Osterhase" (sometimes spelled "Oschter Haws"] "Hase", means "hare", technically not a rabbit, so in northwest European folklore, the "Easter Bunny" is a hare, not a rabbit. In any case, according to the legend, only good children received gifts of colored eggs in the nests that they made in their caps and bonnets before Easter. In 1835, Jakob Grimm wrote of long-standing similar myths in Germany itself. Grimm suggested that these derived from legends of the reconstructed continental Germanic goddess *Ostara. (ref: Grimm, Jacob (1835). Deutsche Mythologie (German Mythology); From English released version Grimm's Teutonic Mythology (1888) )

The Easter Bunny is sometimes shown wearing clothes. In legend, the bunny carries his colored eggs in a wicker basket, along with candy and sometimes toys, to the homes of children on Saturday night before Easter Sunday. Commonly in the United States and other English speaking countries, on Easter Sunday, children wake up to find that the Easter Bunny has left them baskets of candy and Hass also hidden plastic eggs filled with candy and/or the eggs that they decorated earlier that week. Children then hunt for the eggs all around the house.

And a popular religious-based children's cartoon (Veggie Tales) created a song about eating the chocolate Easter bunny! You can download "The Bunny Song" as an  MP3 here, at the far left!  Or get 25 Veggie Tale songs as a cd:

And you can find a history of the Easter Egg here!